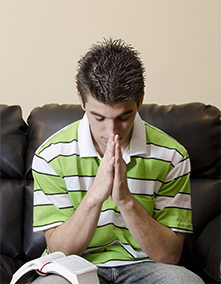 Bipolar disorder can occur in children and youth. Symptoms may include: 1) hypomanic/manic phases with increased energy, goal directed activity, grandiosity, distractibility and decreased need for sleep; 2) depressive phases with depressed mood and poor sleep, energy, concentration. Management includes: 1) stopping any triggering medications such as antidepressants or stimulants; ; 2) non-medication strategies to restore regular biorhythms such as sleep; 3) bipolar medications may be indicated such as lithium, divalproex or antipsychotics.

15-yo Dave is referred to see you by his family physician for unstable moods. He was previously seen with depressed mood and started on an SSRI trial. Unfortunately, the trial led to a period of worsening characterized by decreased need for sleep, euphoric moods, increased activities (e.g. increased religiosity with saying prayers, working out in the middle of the night) and talking non-stop. Afterwards, it was followed by a depressive episode where he was feeling suicidal.

His parents ask: “Do we need to increase the dose of his antidepressant?”

The following symptoms, especially if episodic, are red flags for bipolar:

Children/youth with bipolar can present:

Collateral history from parents (and ideally teachers as well) is important, as children/youth may be poor historians regarding their symptoms. Sample questions to ask, that would need to be modified depending on whether you are asking the child/parent/teacher:

Consider asking the parents to help the child/youth with a mood chart.

Apps to track moods include:

Diagnosis of Bipolar in Children/Youth under DSM-5

Is it normal vs. bipolar/hypomania?

Is it hypomania vs. mania?

Is it bipolar vs ADHD?

Is there major depression?

Are there symptoms of

DSM-5 criteria for a manic episode are as follows.

There are no specific physical findings in bipolar.

However, physical can help to:

Teach child/ parents how to self-regulate

Example of a routine for a child/youth:

When and Where to Refer

Is the patient having clear symptoms of a mania/hypomania, along with significant impairment of function (e.g. unable to attend school; needing constant supervision)?

You are seeing 15-yo Dave for severe mood swings. His symptoms have not responded to a trial of psychotherapy. Symptoms worsened with a trial of SSRIs. History reveals episodes of increased mood and energy, decreased need for sleep. These episodes are followed by periods of depression.

You wonder about possible medication-induced bipolar, and thus:

Goldstein BI et al.: Further evidence for a developmental subtype of bipolar disorder defined by age at onset: results from the national epidemiologic survey on alcohol and related conditions. Am J Psychiatry. 2006;163(9):1633–6.

PDF
Bipolar Disorder in Adults: Information for Primary Care
Case of Hypomania: “She vacuums in the middle in the middle of the night” B. is a 35-year old, married mother with two young children She has tried over 6 different antidepressants, with the last one started last month at a walk-in clinic For the past 3-weeks, she has had increased energy, reckless spending, increased libido and less need to sleep She feels that has the ability to help mothers everywhere She is accompanied to the appointment by her husband, who tells you although his wife appears happier, she just can’t sleep – “She can’t sleep and so she wakes everyone up ...
Add to Info Cart

PDF
Bipolar Disorder in Adults
Introduction Ever since his mid 20's, a normally shy man gets high energy periods lasting up to several days where he doesn't need to sleep, and where he impulsively goes on spending sprees that put him into severe debt. These high periods are often followed by periods of severe low mood and depression, even to the point where he has thoughts of suicide. What's going on here? Is it normal mood swings, or could it be something else? What Is Bipolar Disorder? Everyone gets mood swings whereby sometimes our mood and energy is up, and where sometimes our mood and energy is down. But if you have mood swings so severe that it ...
Add to Info Cart

PDF
Bipolar Disorder in Children and Youth: Information for Families
What Is Bipolar Disorder? All of us have changes and swings in our mood which are normal. There are times when our mood is up, and we have more energy and excitement about things. There are other times when our moods are down, and we have less energy.   However, people with bipolar disorder  have periods of extreme mood change that  cause serious problems in their lives.   In the classic form of bipolar, people have episodes of depression and of mania, when their mood, energy, thinking and behaviour gets stuck for a period of time at a very  low or a  very high level. Hence the term, "bipolar", ...
Add to Info Cart

PDF
Bipolar Disorder in Children/Youth: Information for Primary Care
Case 15-yo Fernando is brought by his parents for problems with unstable moods. He was previously seen with depressed mood and started on an SSRI trial. Unfortunately, the trial led to a period of worsening characterized by decreased need for sleep, euphoric moods, increased activities (e.g. praying for several hours a day including late at night) and talking non-stop. Afterwards, it was followed by a depressive episode where he was feeling suicidal.    His parents ask: “Do we need to increase the dose of his antidepressant?” Epidemiology  Bipolar often starts in childhood and young adulthood  Up ...


There are currently no additional resources attached to this article.

Help your community by letting us know about applicable resources.

There are currently no practice guidelines attached to this article.

There are currently no letters attached to this article.
Can you tell us more about how it helped you? (Optional)
Sorry that our page was not helpful.
You might consider calling an Information and referral service to speak to a live person to help you. Feel free to give us any other feedback.
We appreciate your feedback. Can you tell us more? (Optional)
Your email (Optional - in the event we have more questions, it helps to have your email. We promise not to spam you.)
Your feedback helps us to continually improve our content.

Copy link to this page