Psychopathy in Children and Youth: Information for Primary Care

Summary: Individuals with psychopathic traits exist because having just the right amount of these traits can be helpful. These traits include confidence, fearlessness, an ability to stay calm, and not become distracted by one’s own feelings or emotions nor those of others. As a result, it is not surprising to see that there are certain professions where psychopathic traits are common: CEO, lawyer, surgeon, police officer, journalist, media (TV/radio)... However, when these traits are present to an extreme, they can produce a person who is dangerously antisocial and sociopathic.
Primary care providers can play an important role by helping in the early identification of children and youth with psychopathic traits, and connecting the family with appropriate resources.
Add to Info Cart
PDF 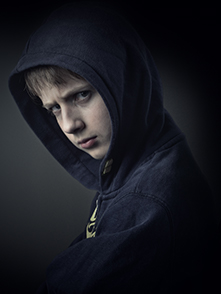 Now that he is in Gr. 3, there are more issues:

Last week, he put the family cat in the dryer, and killed it… He tells you matter of factly, “I was bored, and I was curious what would happen…”

What are you going to recommend?

There are many related terms used to describe people who have troubles with behaviours and empathy.

Research suggests that there are two main paths that lead to the development of psychopathy aka callous/unemotional traits:

There are various neural abnormalities in the psychopathic brain that help explain their behaviours:

Signs/Symptoms of a Psychopath

Despite the above symptoms however, in many children/youth, traits of psychopathy can go undetected because the children/youth are smart enough to mimic others and blend in.

Consider screening for conduct disorder (and psychopathy) when the following risk-taking behaviours are seen in a child or younger adolescent (e.g. between age 10-14) (Searight, 2001)

Given that youth are often reluctant to talk to authority figures about their difficulties, depending on how much time one has, it may be more high yield to simply ask parents first, or talk alone with the parents.

Sample Interview questions for a youth

It’s not always easy being a young person, because there are all these rules that you have to follow, and there are so many ways to get into trouble…

DSM-5 does not have an official diagnosis for psychopathy or sociopathy. However, under the DSM-5 diagnosis of conduct disorder, there is a specifier for “callous and unemotional traits”, which appears to be the closest match for psychopathy.

Many conditions and situations can lead to aggression towards others which include (but are not limited to) the following:

The bad news is that children/youth with callous/unemotional traits are more likely than others (three times more likely in one study) to become criminals or have psychopathic traits later in life.

Are parents having difficulties with their child’s behaviours?

Unfortunately, there does not yet appear to be any “empathy cure”.

Patients (and their families) with psychopathic traits will most likely benefit from specialized mental health interventions. Even if the patient themself does not benefit from classic types of counseling/therapy, treatment and support for the family will be helpful.

Gullhaugen et al.: Looking for the Hannibal Behind the Cannibal: Current Status of Case Research, Int. Journal of Offender Therapy and Comparative Criminology, 2011, 55(3): 350-369.

Hare R: WIthout Conscience: The Disturbing World of the Psychopaths Among Us.

Kiehl, K: The Psychopath Whisperer: The Science of Those WIthout Conscience, 2015.

Information in this pamphlet is offered ‘as is' and is meant only to provide general information that supplements, but does not replace, the information from a qualified professional.

There are currently no related patient handouts.
+ Suggest External Link

Opening the Door to Better Mental Health for Your Youth
The keys to taking care of youth mental health are to work towards building close and genuinely supportive relationships and promoting mental wellness, and to get help early should problems arise. This free guide was designed to help parents forge and strengthen those connections and support their youth's mental health.
Parters for Mental Health
Audience: Public (www.ementalhealth.ca)
Resource type: Printed materials including handouts, brochures and books, Websites including blogs, support forums

OurHealthyMinds
OurHealthyMinds is a mental health website from the Nova Scotia Health Authority. It celebrates the many ways we can be well, and honours the many ways we can experience mental illness - as an individual, a caregiver, a parent, a child or loved one.
Nova Scotia Health Authority
Audience: Public (www.ementalhealth.ca)
Resource type: Websites including blogs, support forums

There are currently no letters attached to this article.
Can you tell us more about how it helped you? (Optional)
Sorry that our page was not helpful.
You might consider calling an Information and referral service to speak to a live person to help you. Feel free to give us any other feedback.
We appreciate your feedback. Can you tell us more? (Optional)
Your email (Optional - in the event we have more questions, it helps to have your email. We promise not to spam you.)
Your feedback helps us to continually improve our content.

Copy link to this page